Home Our School Our school history

There has been a school on our site since 1911 – we still have the original documents detailing how many bricks and windows, beams and doors it took to build it and how much they cost!  Our beautiful building still has many of its original features and hasn’t changed too much since then – just grown on the ends in most places!

The old railway sidings of the Sprat & Winkle line (Queen Victoria’s favourite railway line) passed through our school field at one time and we celebrate that history today with our replica station building on the playground although this now provides welcome respite from the rain! Frequently, we have many old pupils who come back to the school either as they’re passing, because their grandchildren or children now attend here or if they’ve made a special journey to come and see us.

Mr Tipple, the headteacher in the 1970s came back to visit us as have several ex-teachers or their families.  These are such special links for us and really make recent living history meaningful for our children.  Mr Witt, grandad of Bethany, Chloe and Jack recently told me proudly that we now have the third generation of his family being educated here – a real honour! 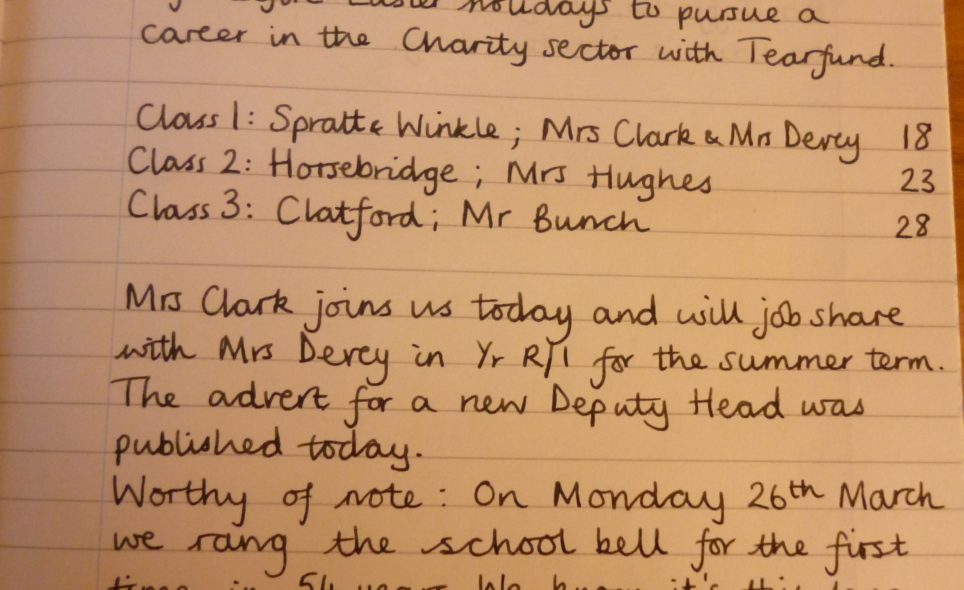 During our centenary year in 2011, we discovered all of the old log books previous headteachers had used to keep a record of the daily going ons at Stockbridge School. They were certainly interesting! However, the most recent log book was only uncovered recently and the most up to date entry was on the 9th January 2004.

As these documents had been so vital to our discoveries of times gone by at Stockbridge and because we are rooted firmly in the digital age where technology never stands still, Mrs Jefferies has started the school log book once again. On the right is a picture of the first record made in the log book this year; 16th April 2012.

We are hoping to run this log book alongside an online book which our children will contribute to – watch this space! 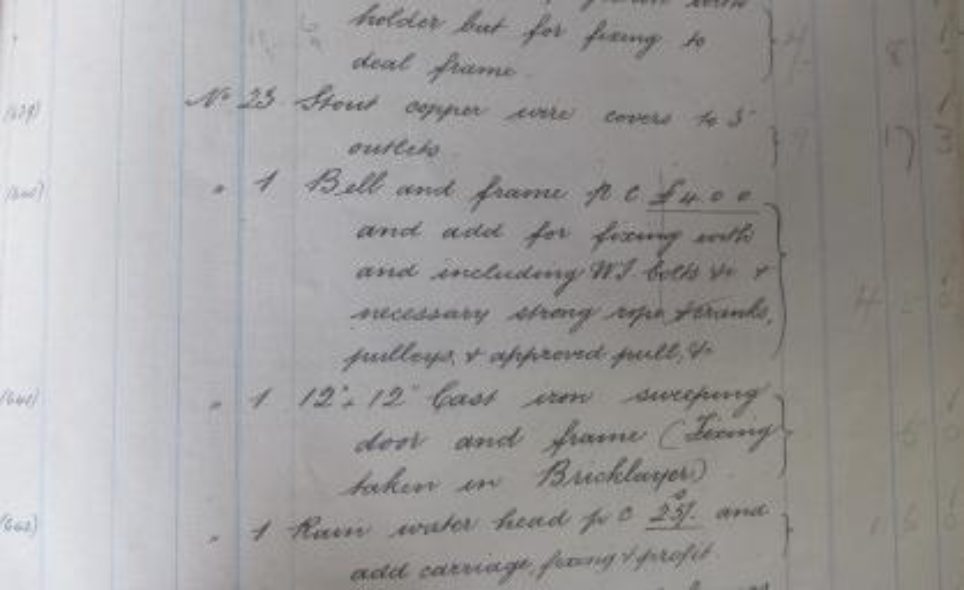 We made history at Stockbridge by ringing our school bell for the first time in 54 years in 2012! We are very lucky to be in a small community where many of the people who live in Stockbridge, Longstock and Leckford as well as some of the other surrounding villages, used to attend the school. On Old London Road, there are some old pupils who were at the school when it was split between our site and Marsh Court.

Mrs May is one of our old pupils. She regularly walks past the school on her way into the high street and stops to chat when we are doing our ‘Sweep Up Saturday’ working party. Mrs Jefferies, our head teacher noticed that we had a bell tower and the old bell was still hanging there. The bell pull is in fact, just outside her office in the heart of the school. Mrs Holdway, who worked at the school for 24 years, hadn’t heard the bell ring in all of that time and Mrs Jefferies wondered if it still worked. Helped by our intrepid then-Chair of Governors, Mr Oliver, who climbed into the roof space and outside up to the bell tower, we managed to get it working once again on Monday 26th March 2012. It was rung by the 2 oldest children in the school; Bradley and Callum and it was a monumentous occasion.

We now occasionally ring it at the beginning and end of each school day. Mrs May happened to be in Stockbridge village on the day Mr Oliver got the bell working – yes, it could be heard in the high street! She said she had left the school in 1958 and had not heard it ring since then which is how we know it was 54 years ago.